Construction Safety, By the Numbers 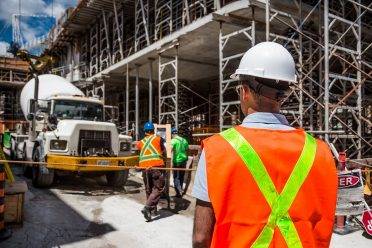 10 According to OSHA, about 1 in every 10 construction workers sustain an injury each year. Many construction companies and workers operate under the idea that injuries don’t happen often and that only those who are disregarding safety rules can become injured. This can serve as an excellent reminder that no one is immune from an injury.

200 In a recent study completed by the Center for Construction Research and Training, individuals who spend 45 years in the construction industry have a 1 in 200 chance of dying on the job. And during the same time, a worker has a 75% chance of sustaining an injury that will leave them disabled. The study also claims that construction workers are at a greater risk of dying early compared to other industries.

20 Between a ten-year span, it was found that nearly 20% of all work-related deaths emanated from the construction industry. More than half of those deaths resulted from the “fatal four” causes: electrocution, falls, being struck by an object, and being crushed between two objects.

9 One of construction’s fatal four, electrocutions make up almost 9% of all construction-related deaths. Deaths are usually caused by coming into contact with power lines, lack of ground fault, or misusing equipment or power cords.

60 Data shows that 60% of construction workplace accidents occur within the employee’s first year on the job. Significant factors include lack of training, experience, and understanding about the safety risks on a job site.

2 On average, 2 construction workers die each day as a result of work-related injuries. The fatal four, mentioned previously, were the most common culprits.