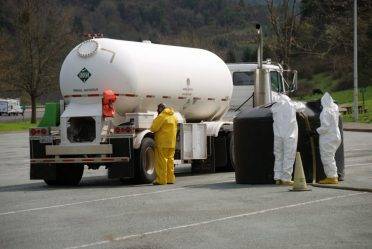 Nearly 40 individuals, comprised of mostly emergency responders, are hospitalized after a leaking anhydrous ammonia tank being transported by a tractor.

When local officials arrived at the scene of the incident, they immediately observed a cloud of smoke, fume inhalation forced the retreat of those individuals. Residents living within a one-mile radius of the incident were alerted to shelter in place, which lasted over five hours. Local law enforcement and fire personnel conducted door-to-door household checks to ensure resident safety.

The container, being towed by a private farmer, housed anhydrous ammonia which is used as an agricultural fertilizer and industrial refrigerant. Anhydrous ammonia, an immediately dangerous to life or health (IDLH) chemical, is a respiratory irritant that expands quickly and forms large clouds that act like a heavier-than-air gas. Exposure symptoms can include: eye, nose and throat irritation, respiratory distress, wheezing, chest pain, and pulmonary edema. Death can occur at high levels.