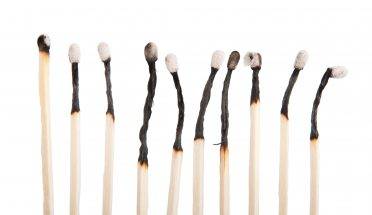 Flammable and combustible liquids are present in almost every workplace. Fuels and many common products like solvents, thinners, cleaners, adhesives, paints, waxes and polishes may be flammable or combustible liquids. Everyone who works with these liquids must be aware of their hazards and how to work safely with them.

Flash Point
the minimum temperature at which a liquid gives off vapor within a test vessel in sufficient concentration to form an ignitable mixture with air near the surface of the liquid. The flash point is normally an indication of susceptibility to ignition.

The flash point is determined by heating the liquid in test equipment and measuring the temperature at which a flash will be obtained when a small flame is introduced in the vapor zone above the surface of the liquid.

Flammable liquid: any liquid having a flash point below 100ºF (37.8ºC), except any mixture having components with flash points of 100ºF (37.8ºC) or higher, the total of which make up 99 percent or more of the total volume of the mixture. Flammable liquids shall be known as Class I liquids. Class I liquids are divided into three classes as follows:

It should be mentioned that flash point was selected as the basis for classification of flammable and combustible liquids because it is directly related to a liquid’s ability to generate vapor, i.e., its volatility. Since it is the vapor of the liquid, not the liquid itself that burns, vapor generation becomes the primary factor in determining the fire hazard. The expression “low flash – high hazard” applies. Liquids having flash points below ambient storage temperatures generally display a rapid rate of flame spread over the surface of the liquid, since it is not necessary for the heat of the fire to expend its energy in heating the liquid to generate more vapor.

The above definitions for classification of flammable and combustible liquids are quite complex. The diagram below should aid in their understanding.

Liquid itself burn:
Flammable and combustible liquids themselves do not burn. It is the mixture of their vapours and air that burns. Gasoline, with a flash point of -40°C (-40°F), is a flammable liquid. Even at temperatures as low as -40°C (-40°F), it gives off enough vapour to form a burnable mixture in air. Phenol is a combustible liquid. It has a flash point of 79°C (175°F), so it must be heated above that temperature before it can be ignited in air.

The lower flammable limit or lower explosive limit (LFL or LEL) of gasoline is 1.4 percent; the upper flammable limit or upper explosive limit (UFL or UEL) is 7.6 percent. This means that gasoline can be ignited when it is in the air at levels between 1.4 and 7.6 percent. A concentration of gasoline vapor in air below 1.4 percent is too “lean” to burn. Gasoline vapor levels above 7.6 percent are too “rich” to burn. Flammable limits, like flash points however, are intended as guides not as fine lines between safe and unsafe.

Auto ignition Temperature:
A material’s auto ignition or ignition temperature is the temperature at which a material self-ignites without any obvious sources of ignition, such as a spark or flame.

For more information on chemical terms and concepts, enroll in our HAZMAT Train-the-Trainer Course. Click here for details (here will take them to calendar page.