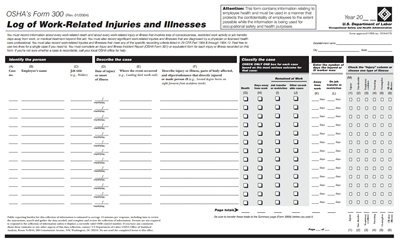 The White House is close to reversing an annual individual illness and injury reporting requirement. The upshot? Nearly half a million companies will escape additional reporting duties to OSHA – along with the potential risk of being visited by curious inspectors.

OSHA says it intends to reverse the Obama-era mandate requiring annual summaries of each workplace illness or injury (Forms 300 and 301) by as early as June. Many in the industry complained of the following:

Rule Was on Hold Already

The annual individual reporting duty was supposed to begin in 2017, but OSHA told employers they didn’t have to submit summaries because it planned to reverse the rule shortly after President Trump took office.

The reg covered over 400,000 employers, specifically those with 250 or more workers, and small companies (20 or more employees) in hazardous industries.

Keep in mind: Annual reports (Form 300A) listing how many injuries and illnesses took place and what percentage of workers who got hurt or became ill are still mandatory.