ON THIS DAY, this terrible day, in North Carolina history…

It is about 8:15 in the morning ON THIS DAY, and Captain Calvin White of the Hamlet Fire Department is still drinking a cup of coffee he will never finish. What he doesn’t know is that a few blocks away, a disaster has just begun to unfold at the Imperial Foods Chicken Nugget plant.

At the plant, the morning shift has punched in. Most of them reluctantly, because the Labor Day weekend is coming up, and they are looking forward to the day off and the long weekend. But to get that paid Labor Day holiday, they had to be on time and on the job the week before. And just as at the fire station, the clocks at the plant are ticking to 8:15 am.

In almost the center of the eleven-year-old plant, there is a twenty-five-foot-long deep fryer running at 375 degrees. Near the fryer is a hydraulic line that controls the conveyer belt that works in conjunction with the fryer. It has recently been altered with a fitting that isn’t rated to handle the pressure the hose carries. At 8:15, that fitting blows free, spraying hydraulic fluid into the burners of the deep fat fryer. A horrendous fireball erupts.

In seconds the hydrocarbon-rich hydraulic fluid, along with the now burning oil from the fryer, spews thick black smoke in all directions. The initial fireball cuts the phone lines, so no alarm goes out. In seconds the survivors are blinded by smoke that is so filled with hydrocarbons it will incapacitate within seconds. The 90 employees recoil away from the fire and begin seeking escape.

The regulator on the natural gas line feeding the burners on the fryer then fails in the heat, flooding the fire with natural gas. It is a white-hot fireball from the heart of hell. Many of the plant’s employees grope their way to exits, only to find them padlocked from the outside. There is no escape, and many will die, here, in these spots desperately pounding, kicking, beating on the door.

Meanwhile back at the firehouse, the daily routine is shattered when at 8:24 am a car squeals to a stop outside, and a frantic Brad Roe, operations manager of the Imperial Foods Plant (and the owner’s son), bursts into the fire station to report the fire. The phones at the plant don’t work. However, in his desperate drive to save the plant, he forgets to mention that there are still people trapped inside.

As fast as the firemen respond, it is still three more minutes before the first truck arrives on the scene, and Captain White steps down to a nightmare of dead and dying. He grabs the radio and frantically pleads for every unit available to respond.

Meanwhile, inside the plant, workers are stumbling and fumbling their way in a desperate attempt to find a way out. Some find their way to a cooler, hoping it will be a shelter from the fire. It won’t be. Twelve will die here, and five more are seriously injured. Seven more flee the immediate vicinity of the blaze only to pile up inside yet another padlocked exit door. The door’s interior is marked with the indentations and tracks of their melting shoes as they desperately, frantically, fruitlessly, try to kick the door open. They all die.

By the time the fire is out, and the plant has been cleared, 25 workers are dead, and 55 injured by burns, blindness, respiratory disease from smoke inhalation, neurological damage and post-traumatic stress disorder. Only 11 of the 90 employees escape unscathed.

And it will turn out that the plant owner, Emmett Roe, has padlocked the fire escape doors shut to keep employees from what he suspects is pilfering of the chicken nuggets the plant produces. A little over a year later, on September 15, 1992, Roe will plead guilty to 25 counts of involuntary manslaughter. No one else is found guilty. He is sentenced to 19 years and 11 months…but is paroled after four years. He is ordered to remove himself from North Carolina, and never to return. Imperial Foods is fined $808,150…the highest in the history of North Carolina. The plant itself is closed and bulldozed. 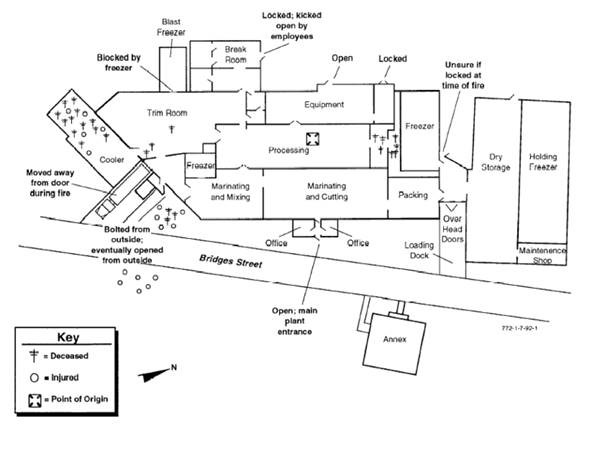 -The deep fryer where the fire started.

-The Hamlet Industrial Foods Plant, with the burned-out collapsed roof directly above where the fire started.