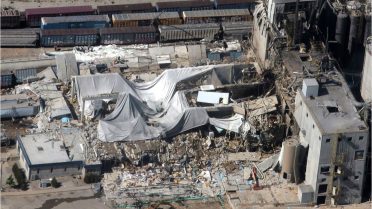 When things have been going well for a period of time, workers can develop a false sense of security. “I’ve been doing it this way for 20 years,” they may say. “Nothing will ever happen to me.” The problem with this line of complacent thinking: The majority of people who have been injured on the job probably thought that – until the unthinkable happens.

The Calm Before the Storm

A recent fatal explosion at a mill in Wisconsin highlights why complacency is dangerous. Only 19 people were working at the mill that night and, from all appearances, it was just another regular shift. The facility had a dry corn milling process, which is inherently a dust-producing operation. The corn dust is combustible and known to be capable of generating overpressures under the right conditions. At approximately 11 p.m. that night, an explosion killed five workers and injured the remaining 14 people. The U.S. Chemical Safety Board (CSB) is investigating, and what they discovered so far and released to the public is startling. In interviews with workers, they told the CSB they believed conditions at the mill that night were “normal.” Up until just moments before the explosions, workers were either unaware of any problems or assumed their troubleshooting efforts would reveal a manageable situation. One of the workers even noted that before the explosion, it was a “really quiet, really calm night.” Other workers noted they smelled smoke. But the superintendent said based on his previous experience, the worst he’d seen when someone reported smoke in the mill was a burning belt or motor.

The CSB hasn’t determined the cause of the explosions yet. But the agency noted there were dust clouds before the incident, and that the stirring up of combustible dust on the floors, overhead piping and other surfaces inside the mill may have triggered the fatal blast. Either way, the interviews with workers reveal they were in a lull of complacency – thinking nothing bad would ever happen, until it did. Let your employees know that complacency can be a killer. Generating interest in safety and getting workers involved in your program is one of the best ways to stamp out complacency – before it leads to big trouble. To learn more about dealing with HAZMAT Emergency Responses such as dust explosions, plan on attending our HAZWOPER Train-the-Trainer in Wilmington, NC November 5-9, 2018. Click here for details.