AN UNCONDITIONAL COMMITMENT TO SAFETY: THE EDGAR SANCHEZ STORY 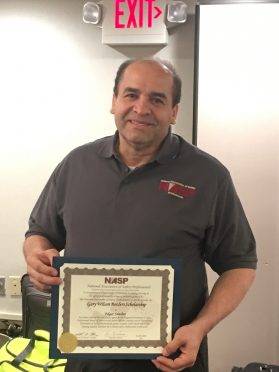 A driven advocate for employee safety, Edgar Sanchez knew years ago that he wanted to further his safety career to better facilitate the language barrier between the company he worked for and its large population of Spanish speaking employees. After finding an advertisement for our CSM class, Edgar eagerly printed it out and asked  for management approval for the trip. Edgar was denied on multiple occasions by his company, but he never gave up. Passion and determination are what drove Edgar to our CSM New Orleans class this early October. Realizing he would have to pay out of pocket for this trip, Edgar saved for years -sacrificing vacations and even small treats like a night out to dinner with his family – but at long last his dreams came to fruition.

After hearing his heartfelt story, NASP quickly realized that his hard work and perseverance should not go unrewarded. Upon finishing the class, the Executive Director, Eric Gislason, awarded Edgar with the Gary Wilson Borders Scholarship, covering 100% of his tuition costs for his Licensed Safety Professional (LSP) certification. Congratulations, Edgar!